Riley, as captured by the talented Marisa Rebecca

For the last five years, I have shared my home with a West Highland White Terrier named Riley. I would say I’m her owner, but in all honesty, she owns me.

Riley weighs about sixteen pounds. She has white fur (unless she’s been rolling in garbage or dead animals), a black nose, and bright eyes. She’s a small dog to begin with, but when she curls into a ball, she becomes impossibly and adorably tiny.

For the first few weeks of our relationship, Riley was a four-pound puppy.

Things were awkward between us from the start. When I met her, she was sleeping in a pile of urine-soaked shredded newspaper with a bunch of other puppies. That night, I brought her to sleep in my warm and soft bed, which was not soaked in urine. 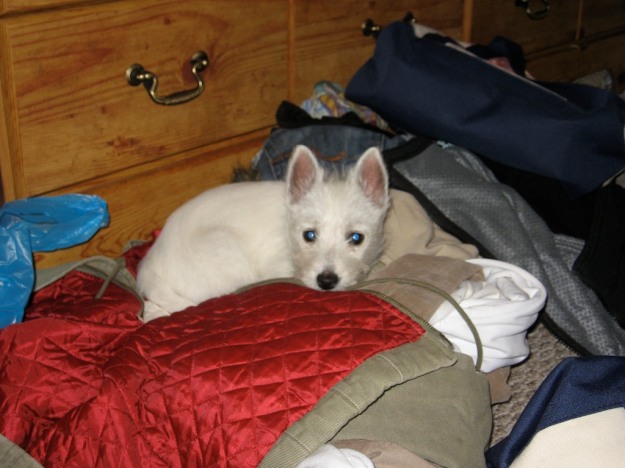 Yes, my floor used to look like this. Don’t judge.

Riley would have none of it. After I fell asleep, she tumbled out of the bed – three feet high, no less than ten times her height – and nested in a pile of textbooks and not-yet-laundered clothing. Within the coming weeks, she would use her needlelike puppy teeth to shred all of those things. And for all of her distaste for sleeping in my bed, she developed a fondness for burrowing into the space underneath the bed. She lay on her back and clawed viciously at my box spring until she’d cleared an opening. Then she burrowed into the mattress, bringing with her all of the scavenged underwear she could carry. I couldn’t reach her under there. Many sleepless nights passed with me tossing and turning as I vibrated with the scratching and clawing of my little puppy destroying my bed from the inside.

Needless to say, it took approximately one year for me to love her. In that year, almost all of my belongings were chewed to pieces. Although Riley was crated when I couldn’t keep an eye on her, she managed to act like a ninja in plain sight. The destruction didn’t sit well with me. I contemplated opening my front door and letting her run away. I contemplated no-kill shelters. I contemplated finding her another happy home on Craigslist. But then I’d melt looking at her little face and change my mind.

We’re friends now. I adore her. She’s the best little four-legged furry thing to come into my life. And although she’s not allowed in the bed, she loves to cuddle on the couch.

Riley and I having a Lion King moment

She’s still a little crazy, and a little murderous. She can’t help it. Her breed was originally used as “ratters,” or rather, dogs who viciously murder rodents. She barks at every squirrel and chipmunk. When we had mice in our old Philadelphia apartment, she faithfully slaughtered them whenever possible. But underneath the homicidal maniac is a little sweetheart who would do anything for you to play fetch with her tennis ball, or toss over a handful of popcorn. She loves popcorn.

Fortunately for Riley, so do her humans. When she hears popping, she runs to the stove and will faithfully follow her person from cabinet to couch. Then she sits expectantly and patiently, completely alert, just waiting for a kernel to come flying. Her lightning-fast reflexes know it’s coming before she does. She snatches popcorn from seemingly thin air, crunches it with glee, and then leans back to wait for the next one. She’s adorable, and it’s fun to watch her catch popcorn, so the next one always comes.

If you’ve only made popcorn from microwave bags, I’d recommend you branch out and try stovetop. It’s healthier – no unknown chemicals – and even more delicious. And perhaps you could try feeding it to your dog (in small quantities, of course). She might love it just as much as Riley does.

In a large pot with tight-fitting lid, heat the oil over medium-high. Place three unpopped kernels inside and close the lid. Listen carefully until you hear three pops. Then add the rest of the popcorn. Replace the lid, give the pot a good shake to coat the kernels in oil, and step back.

Soon, you should hear some serious popping. Feel free to shake the pot occasionally; it helps unpopped kernels fall down and get popped.

When the popping starts to slow, turn off the heat. Move the pot off the burner and wait for the popping to stop.

Pour into a big bowl and enjoy. Remember to toss a few kernels to your pup!

Follow instructions above to make Popcorn for Riley: add oil and three kernels to pot on medium high. When kernels pop, add the rest of popcorn and shake occasionally.

After all the popping has stopped, open the lid and melted butter, Parmesan, truffle salt, and black pepper.
Close it and toss vigorously.

Enjoy with a fine film and a canine companion at your side. 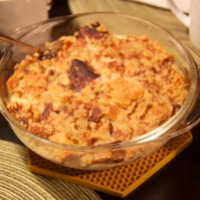 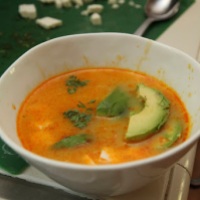